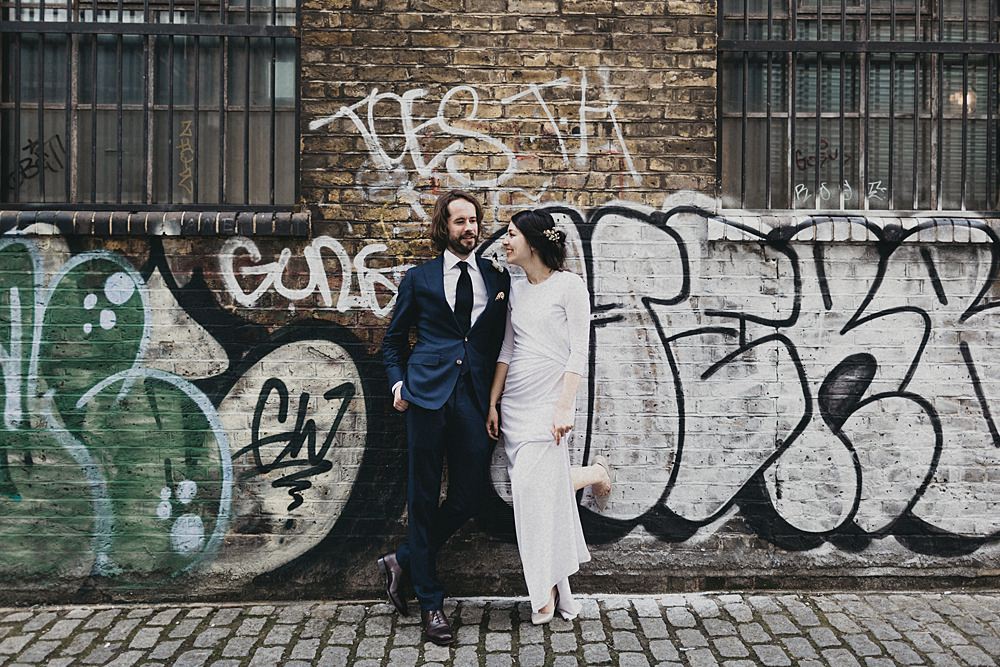 Fancy starting the weekend off with an uber cool wedding in the city? Course you do. Then allow me to introduce Anita & James’ big day; understated but oh so stylish.

After an intimate ceremony at Islington Town hall celebrations continue at St John Bread and Wine restaurant in Spitalfields. The decor is minimalistic with delicate blooms and fruit, but when you get to enjoy food at your favourite haunt with the people you love, what more could you want.

Bride Anita looks seriously stylish in a sleek Givency gown, whilst her best girls got to don dresses of their choice in monochrome tones, and documenting all this immenseness was the talented Jason Williams Photography, whose image of our gorgeous couple in front of the graffiti wall makes my heart sing.

Anita the Bride: James proposed mid-conversation over a late night pasta at the kitchen table on a Tuesday after work. It was tentative and entirely unexpected. I said yes without hesitation. This too took me by surprise as I am ordinarily quite indecisive and analytical – and we had been together for just on twelve months! The prospect, however, of being the wife of a man who, despite claiming to hate puns, won my heart with an elaborate sequence of truly ‘fowl’ bird-themed puns was irresistible. As was a future in which we would continue to share our little thoughts around the kitchen table.

James and I are both from Norths – he is from Sheffield and I am from Cairns, in the far north of Australia. Just where to hold the wedding presented a conundrum. In the end, London was the pick as this is where we met and live. Both of us wished to avoid anything formal and the pressure of it being ‘the best day of our lives’ – rather we just hoped for a cracking party with good food, wine and friends. We chose Islington Town Hall, St John Bread & Wine and The Ten Bells, both in Spitalfields, where there was much dancing to Pulp under streams of handmade bunting. The teams at both places went above and beyond and I particularly love the Victorian history behind The Ten Bells.

Family and friends joined us from the UK, Australia, Singapore, the US and even South Sudan. After a slight mishap involving me getting stuck in the mop closet of Islington Town Hall, we had a late afternoon ceremony in the Council Chamber. My mum walked me down the aisle to an instrumental version of “Maps” by the Yeah Yeah Yeahs. Seeing James standing there was more emotionally intense than I had anticipated. Three poems were read, including an Australian bush wedding epithalamion by poet Les Murray which succeeded in reducing me to tears.

I had in mind something very simple, well cut and clean. I’m not the keenest shopper and did not try anything on or even look around. I bought a Givenchy dress online at Selfridges, considerably discounted as it was the last left.

I paired the dress with a pair of trusty and very re-wearable L.K.Bennett heels.

My mum gave me some beautiful earrings which I wore on the day, along with a bracelet from my Singaporean extended family. The bracelet was in a ‘Peranakan’ style, in a nod to my Singaporean and Indonesian heritage.
My hair and make up were done by the deft hands of Leanne White who, additionally, has terrific chat!

As for rings, some months after James proposed, he decisively said that he wanted his wedding ring to be the “colour of the gold in the British Museum”. So began a treasure hunt, leading us to a sandcast ring made by Cornish jeweller Justin Duance. Both my engagement ring and wedding band were made by Hannah Bedford.

James the Groom: I got ready at Batty Langleys a boutique hotel a short walk from the party. Friends and family came around and we relaxed with some pre ceremony gin and tonics.

I just wanted to keep things relatively simple and let my wife shine, but still look smart enough for the occasion. My suit was made to measure by Suit Supply, a darkish blue with a fine check, and the wedding date embroidered under the collar, and a light blue lining as a nod to where I met my best man and ushers.
Tie and square were from Drakes, a lovely place that still makes things by hand in the UK. The tie is a navy grenadine and the yellow square was a present from Anita. Socks were in a nautical stripe and cufflinks were mother of pearl, as Anita loves all things maritime. Shoes were dark brown consuls from Church’s.
There was no dress code the rest of my party (within reason) and they all turned out well. The buttonholes are made from old books and picked up from Alana Phoenix and Co. via Etsy.

Anita the Bride: I opted for a “wedding crew” as wanted to move away from a bridesmaid hierarchy. As for dresses, all three – Amy, Togo and Juliet – are such clever, funny women with their own sense of style and self. I asked them to wear whatever they wanted in either black, white or both. The dresses that were chosen were from Zara, Anthropologie and Australian designer Allanah Hill. On the day, I gave each of them a different nautical-themed gift from Wolf & Badger to thank them for being part of my crew.

James and I love learning about new dishes and cooking, but just not together. When we settled on having our wedding in London, however, we knew pretty quickly that we would want to have a feast at St John. It is James’s favourite restaurant and the food is unfussy but highly skilled and bang-on. We started with a champagne reception where a mix of snails, butterbean brandade toast and salt cod and aioli were served. After foie gras toast (which we cautioned our many vegetarian friends about) and artichokes for entrée, we had fish pie and roast suckling pig on long feasting platters. A mix of British traditionalism and an Asian celebration favourite. The night was capped off with custard tart and apple pie, as well as Pedro Ximinez sherry which is often described as “Christmas in a bottle” – who cares if it was June! Post-dinner at The Ten Bells there were cheese and charcuterie platters, washed down with Aperol spritzes and ginger G & Ts.
Although some couples say that the day is so busy they don’t get to eat, James and I can happily say that we were not one of them.

We live right up the road from Hamish Johnson. It made sense to order a cheese tower from them and, stunned at the cost of tiered wedding cakes, opted for a delicious rectangle slab cake from the Hummingbird Bakery.

We were absolutely thrilled to find Alexandra Nutting and the business she runs with her sister, Aesme. They grow all of their own flowers in Hampshire and decorated St John and The Ten Bells with an artful jumble of flowers and fruit, interspersed with candles and foliage in a way that did not disturb the simplicity of St John. When I met Alex, I immediately felt at ease and she put a lot of thought in to creating the right backdrop even though I did not quite know the name of one flower from the other.
My incredibly talented mother in law arranged all of the bouquets with great love and care, using flowers sourced from Aesme. My sister in law Jenny and her partner Joe also made us the loveliest wooden welcome sign.

We spoke with just one photographer, Jason Williams, and liked him right away. Drawn to his candid style, we did not want to do any fussy poses which would detract from the day and take us away from the celebration. Having spent an afternoon with Jason before the wedding we felt so comfortable when we met him again on the day. And despite having no less than 5 venues that he had to be at, Jason photographed our wedding from start to finish with good humour and charm. He captured the stress, awkwardness, beauty and love with great sensitivity. For us there was simply no better photographer – we are so pleased to have met him and it felt like having a friend at the feasting table with us.