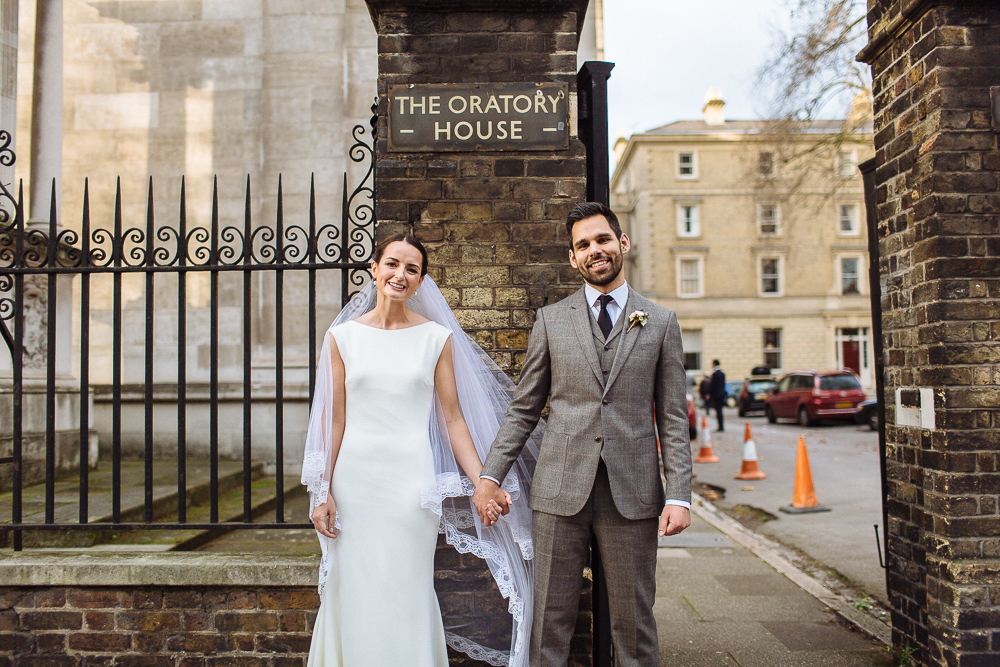 I always love a good pub wedding, they are such good fun and everyone is clearly having a whale of a time. I mean – they are in a PUB and it’s a wedding – could there be a better combination?! Clare and Richard’s wedding day is no exception, the smiles are just beaming from every face. Clare looks ridiculously elegant in Pronovias, that slinky gown was made for her. The boys look rather dapper too, I’m loving the shots of them having drinks together before the ceremony, it’s a special time for the boys, as well as the girls and deserves to be documented!

Along side the images from Steve Fanstone, we have the film from The Love Lust List members, A Piece Of The Party, so make sure you grab some time to watch it properly – it’ll have you smiling as much as Clare, Richard and all their wedding guests! Enjoy lovely ones, it’s such a heartwarming wedding.

Clare The Bride: My dress brief was simple – classic and something that felt like ‘me’. I eventually found what I was looking for at The Wedding Dress Shop in Wimbledon Park from Pronovias Atelier. My dress didn’t look like much on the hanger, but felt perfect on. I picked up my shoes for £60 at a Charlotte Olympia sample sale and wore simple pearl drop earrings from Auree. My mother’s 1970s lace veil – which my sister had also worn when she was married two years before – was the finishing touch. Beauty wise, Renato from Bobbi Brown did my make-up and Rosanna Bell from Duck and Dry created by braided up do. When dress shopping, my top tip would be do not be seduced by the surroundings of a fancy bridal boutique. You’re buying the dress, not the experience.

Richard opted for a grey, three piece, off the peg suit from John Lewis and Grensons brogues from Mr Porter.

Before even getting engaged, we knew we would one day marry at The Brompton Oratory Church as Richard and I met at The London Oratory School when we were 17. The fact that we were eventually married by our school Chaplain, Father George, made the whole day even more poignant. For our reception, we wanted low key and unfussy – we’re definitely not grand country house people – so we looked at lots of local pubs and eventually settled on The Fox and Grapes on Wimbledon Common. Coaches brought our family and friends to the pub, while Richard and I hailed a black cab from outside the church.

My old friend Jessica Tibbits designed our beautiful stationery, everything from the invitations to thank you cards and table numbers. Bouquets and buttonholes were created by Scarlet and Violet whose signature is undone, relaxed arrangements. The idea of a colour scheme was too fussy for us so we just opted for lots of white and green blooms. As for the flowers at the pub, we collected jam jars throughout our engagement and Richard and I arranged flowers from New Covent Garden market in them the day before the wedding. Lots of people said we were mad to do it ourselves, but that morning together is one of our happiest wedding memories. After an evening calligraphy class, I felt confident enough to create the name cards for the tables myself and we used an image sourced from Pinterest to make ‘Perfect Match’ matchboxes as the table favours. I also put together goodie bags for our young guests containing chocolates and yo yos and colouring books to keep them entertained during the boring bits. Heaps of candles, fairy lights and polaroids of Richard and I throughout our relationship were the finishing touches.

My sister’s Maid of Honour dress was from Not Another Boring Bridesmaids Dress in Wimbledon Park while my Bridesmaid’s navy silk gowns were a last minute purchase from Ghost. The flower girl’s dress was a bargain from BHS and, as I don’t like little children in suits, my mum knitted our nephew Theo a cardigan, which he looked adorable in as our Page Boy. Richard’s Best Men and Groomsmen wore their own suits and we gave them each a Debenhams tie so their looks were similar without being too matchy matchy.

One of the reasons we plumped for The Fox and Grapes was their incredible food and they didn’t let us down with the menu on the day. Scallops, beef wellington and wedding cake perfectly fulfilled our ‘low key but delicious’ brief. Our naked wedding cake from Cakes by Robin in Southfields was made up of chocolate, carrot and lemon tiers decorated with white flowers left over from the jars on the tables. In the evening, we feasted on a massive cheese board and, because it was the weekend before Christmas, piles of mince pies.

One of our earliest and easiest decisions was picking Steve Fanstone as our photographer. He’d shot our friend’s wedding and not only had we loved his relaxed pictures, we’d barely noticed him there on the day which, in our eyes, made him the perfect man for the job. Steve’s a genuinely lovely guy and we were thrilled with his images. Hiring a videographer was probably our last decision, after being adamant we didn’t want one, we took the plunge just three weeks before the big day. It turned out to be one of our best choices as we’ve watched our video countless times since. A Piece of The Party create fun, spontaneous edits that really capture the happiness of your day and we couldn’t recommend them more more.