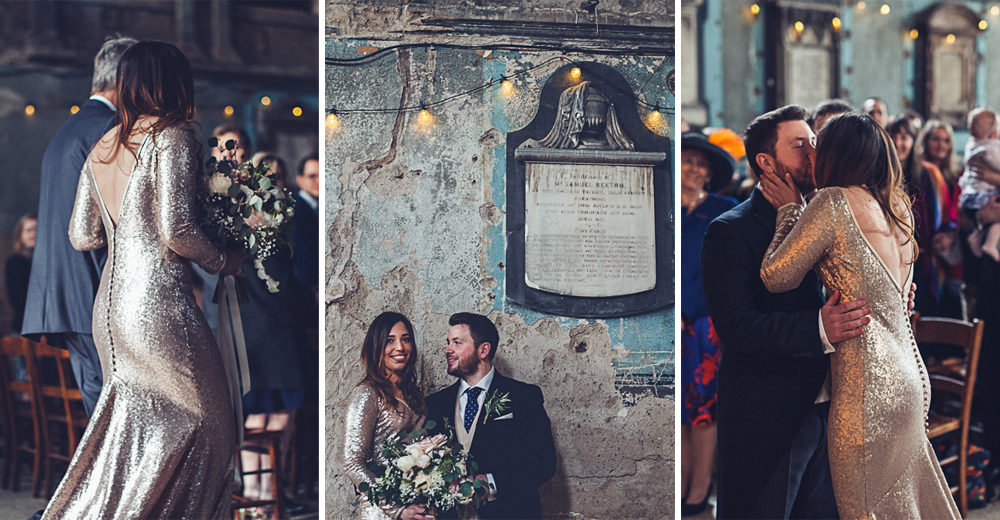 In the end, we felt our wedding was perhaps not as meticulously curated as others but it made us so happy. It felt like the biggest joint birthday party imaginable. There is a reason we are beaming in all of the photos – we were ridiculously happy all day. I would advise others to simply enjoy it. Little things might go wrong, but what really matters – and what weddings are really about –  is marrying your best friend in the presence of those who love you.

Have any truer words ever been spoken?!? Not only does Emma write beautifully, she also rocks a gold sequinned dress like a goddess – enjoy lovely ones, this wedding will most definitely put a smile on your face.

Emma The Bride: We’re Emma and Patrick, we’re both 27 and live in Bermondsey. I work in the development department of the V&A, and Patrick is a writer and producer of digital media. We met online in November 2014 – Patrick sent me a very drunken message after an Arsenal victory and I was oddly charmed by it! After three (also very drunken) dates we were pretty much sold on each other. Patrick moved in after a few months “temporarily” and never left.

By spring 2016 we were engaged, and the wedding planning started in earnest. Our priorities were fairly evenly split: I cared about photography and the dress, and Patrick cared about the music and the food (and booze!) Neither of us wanted to spend an enormous amount of money either, so we agreed that we would spend money on the things that mattered to us, and do the rest cheaply. I did my own makeup, made the confetti cones from old books, didn’t decorate the ceremony venue at all apart from one flower arrangement made by Patrick’s dad, bought 90 champagne flutes for £35 from IKEA, and used ordinary black cabs for transport – and we walked home (hand in hand!) from our reception venue.

I knew fairly early on that I didn’t want a white dress, and after trying on a couple, my suspicions were confirmed: they just weren’t my thing. I’d been mentioning the idea of a subtle gold dress to a few friends and my cousin sent me a picture of someone she knew who got married in a  pink sequinned dress. I immediately knew that I wanted pretty much the same thing in bright gold. I contacted the dress designer and maker Margo Stankova immediately and booked an appointment to see her. She was an absolute delight: she helped me design the dress to my liking and, of course, made it beautifully with perfect details, such as allowing me to button up the train in such a way that I could dance! The biggest challenge was keeping my mouth shut about it – I knew Patrick would absolutely adore it and I was so excited for him to see it on the day.

Patrick always wanted a morning suit as we rarely have the opportunity to dress up together. Neal & Palmer were absolutely amazing; they sized him and the ushers up by eye and helped them pick the most beautiful suits, ties and pocket squares. One of Patrick’s ushers was, in fact, an usherette – Becky chose her incredible dress, which was from Whistles. All of the ushers (and usherette) had the most lovely buttonholes made by my excellent friend Jo at Bumble Bear Blooms. Patrick had stressed that he didn’t want anything too big, and she came up with the most delicate and contemporary foliage-based buttonholes – with a sprig of gypsophila for Patrick.

I trusted Jo entirely with my bouquet – the only brief I gave her was that I loved the foliage-heavy bouquets that were becoming popular, and that I liked pale pink – and she did such an incredible job – it was perfect. Patrick’s dad, who is a vicar and excellent at flower arranging, did the enormous arrangement at the chapel, full of gypsophila, which I love. We’re so grateful that we have such talented friends!

I genuinely didn’t mind what my bridesmaids wore – I wanted them all to wear something they felt happy and comfortable in so let them pick their own outfits. They did a brilliant job scouring the high street for three amazing outfits within the budget and all looked absolutely beautiful. Jo made them matching posies of gypsophila.

One of the most important elements for me was the photography. After a few weeks of research I found Lovestruck Photography, loved their relaxed reportage style and booked them immediately! Juliet and Laimonas (newlyweds themselves) were absolutely wonderful; from our initial meeting we saw eye to eye and we trusted them to catch the moments we thought we would want to remember. They did that amazingly and more! We warned them that we were both quite awkward in posed photographs but they were so reassuring. The photos we ended up with are magnificent and our wedding looks amazing, if I say so myself! It was strangely emotional going through them after the wedding; the day was so perfectly and beautifully documented it was like living through it again.

As neither of us is religious, we knew we didn’t want a church wedding, but we wanted to get married somewhere that would have the kind of solemnity and sense of the numinous that a church has. We also wanted it to be easy for people to get to. I stumbled upon the Caroline Gardens chapel, aka the Asylum, while reading some wedding blogs (including RMW!) and immediately adored its stained glass windows, ruined walls and faded grandeur. As a deconsecrated Georgian chapel in Peckham, it basically ticked all of our boxes. We went to visit it and loved the echoes and atmosphere, as well as the beautiful candles and festoon lighting.

The readings were also very important to us. Again, we wanted the feel of a (very relaxed!) church wedding, so we had three readings: an excerpt from Shakespeare’s King John, the final paragraph of Emma by Jane Austen, and a letter written to us both by my grandfather shortly after we got engaged, in which he congratulates us and says how well matched we are. He was unable to come to the wedding, but we wanted him there in spirit! They were read by our dear friends Susannah, Vonnie and Dahlia.

I walked down the aisle to “Come Away With Me” by Norah Jones. I had felt calm all morning but suddenly became overwhelmed and had a small cry outside the chapel while I was waiting to walk down the aisle with my stepfather, Chris, and my bridesmaids. I was struggling not to cry again as I came in and could feel my legs wobbling, but it was so wonderful seeing Patrick again (looking so handsome) after not having seen him since the day before! I had to give him a little kiss when I arrived (I’m still not sure if that was allowed) to calm my nerves.

The ceremony flew by without any disasters and we walked out to ‘Home’ by Edward Sharpe and the Magnetic Zeros, a song which still fills me with such joy. We had a champagne reception on the steps of the Asylum. It rained briefly but this produced an amazing double rainbow which many took as a sign of good things to come…

After the ceremony, Patrick and I hopped in a black cab to take us to the reception venue, The Grange pub in Bermondsey, which we had booked out in its entirety, and our guests piled onto a retro London bus ten minutes later, much to Patrick’s nephew and godson’s delight! Thank goodness we did go early – when we arrived, despite paying for the pub to shut early, they were still very much in the process of setting up, so rather than sipping prosecco and snatching a few minutes of peace as I had imagined, we spent the time frantically putting out place names (luckily I knew the table plan by heart!), unboxing the cakes, setting out the little baskets in the bathroom (filled with useful items for the evening: tights, chewing gum, plasters, painkillers, lip balm, deodorant!) and decorating the tables.

It did look lovely in the end (there are pub workers putting up fairy lights in the background of some photos though!) but the pub had never hosted a wedding before and obviously didn’t know how to handle it! The food was hearty and delicious, made using seasonal British produce: crabcakes, crispy pork belly, buttery pasta with green vegetables, cheesecake, rhubarb crumble. The cake table featured cakes of all kinds made by me, my mother, my bridesmaids, and Fatties Bakery from Druid Street market.

The speeches were perhaps one of our favourite parts of the evening (not least because Patrick loves being the centre of attention!). Many of my friends told me they wept! I gave a speech too: it feels outdated that it is still only the men who traditionally give speeches and I will never miss out a chance to smash the patriarchy! As well as making a stand, I wanted to thank everyone for coming and announce to the room how much I love Patrick.

After the meal was dancing – our first dance was to Moonlight Serenade by Glenn Miller, which is a favourite of my grandfather’s, then on came our band, Los Amigos! They were an brilliant Latin band who played outstandingly well and had everyone dancing and chanting “one more song!” at the end of the night. Patrick’s parents met in South America and impressed everyone with their Latin dancing abilities! My friends also very much enjoyed Spanish good looks of the lead singer, Javier…

In the end, we felt our wedding was perhaps not as meticulously curated as others but it made us so happy. It felt like the biggest joint birthday party imaginable. There is a reason we are beaming in all of the photos – we were ridiculously happy all day. I would advise others to simply enjoy it. Little things might go wrong, but what really matters – and what weddings are really about –  is marrying your best friend in the presence of those who love you.