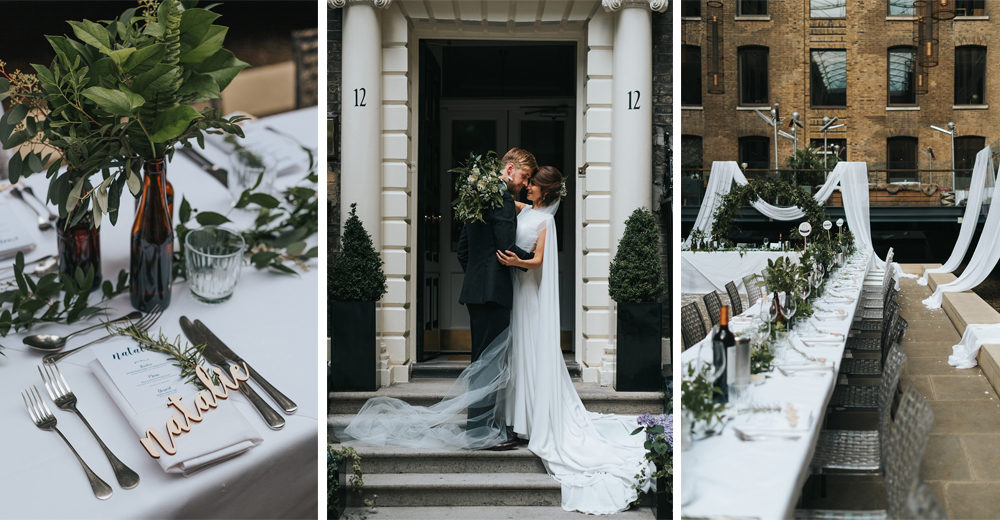 Right people, this is a wedding you need to settle down for. Go and get a cup of tea and get comfortable. It’s FULL of gorgeous images because Miss Gen is behind the lens and quite frankly, I couldn’t whittle down the selection any more. She’s an absolute master of wedding photography and these photographs are giving me all the feels.

Firuze and Mark are also a pretty special couple – obviously they are rather easy on the eye, but they’ve been through a lot and so their wedding day was a very important occasion for them. Enjoy the images and words from Firuze, their story will bring a tear to your eye and the details will make you swoon. We’re so thrilled to share their big day with you all…

Firuza The Bride: I’m half Iranian, and there’s a strange form of Persian traditional called Taarof. This means you should be offered something several (usually three) times before accepting. Unfortunately for Mark, this happened with him asking for my hand in marriage. The first time he asked we were talking late at night in bed about our future, and just as I was about to drift off to sleep he asked me to marry him. Thinking he was just generally asking to plan the future, I said yes. When he became excited, I realised what he meant and quickly said, “But we’re not engaged are we?!” He immediately felt sheepish and asked me to forget he asked.

The second time was a complete surprise. We were meeting up for dinner and agreed to meet in Soho Square. I’d had a dreadful day at work that brought me to tears and couldn’t wait to see Mark for him to comfort me and give me a hug, tell me everything was ok and that work isn’t everything. When I got there I saw him and tears came to my eyes again, and he started telling me how much he loved me. I kept crying thinking about how horrible the day was that I barely realised it when he got down on one knee. It was then that it hit me that this is where we met for our first date, and the romance coupled with the awful day meant that I broke down into an emotional wreck! At that point he realised this probably wasn’t the best time to ask and (while a homeless man clapped us out) we went home, but again Mark was feeling quite sheepish as I’d refused a second time.

After this I thought he’d never ask me again. And then something awful happened. In December last year I was diagnosed with breast cancer, and our world came to a standstill. It wasn’t the first time I’d had cancer (I was diagnosed with a rare bone cancer aged 11) and so I knew what was in store. This definitely wasn’t the time to propose, as unsurprisingly I became an emotional wreck again. After multiple tests, surgeons and planning of my treatment, I had surgery in February to remove both breasts. I immediately felt like I’d lost part of my femininity, but Mark was telling me how much he thought I was still beautiful and absolutely loved me. At this point I knew we’d be together through everything life could throw at us.

In May I’d recovered well, and had started radiotherapy. The doctors and nurses at the Royal Marsden hospital were so fantastic I stayed calm and happy during the whole time, and as the sun came out one Saturday, Mark decided we should have a picnic on Clapham Common. We spent the day together talking about anything and everything but my situation, and it was the perfect moment to feel normal again. Amid the crowd of people, Mark pulled out a bottle of bubbly, two glasses and a small box. He didn’t get down on one knee, didn’t make a scene, and I don’t think anyone around us knew what was happening. We were in our own world as he whispered the question a third time. This time, I said yes!

Neither of us wanted the traditional wedding and definitely made sure we only did what we wanted to do, rather than what was expected by default. We wanted to make sure that our wedding reflected us both, including our hobbies, work and past together. Mark works in beer and so we named the tables after different beer styles, and Firuze designed the beer labels with the date and hashtag for the day. We also brought in our own beer and called it ‘Fark Beer’ (Firuze + Mark = Fark) and had Mark’s favourite beer, Trois Monts, with the canapés. Firuze is a creative and so designed all of the stationery and included a ‘design a card’ stand so guests could use art and craft supplies to make a card for our first anniversary. She’s also half Persian, so we included a few traditions from Iranian marriages, including the honey tasting ceremony and a Sofreh Aghd.

Firuze used to work in fashion and textiles and so was adamant that she would make her dress. After trying on a few different styles to figure out what she wanted, she came across a gown that could be customised to a dress she knew she couldn’t make. She gave in and with the help of the staff at Mirror Mirror created a very unique gown that you could never find off the shelf. She wanted to keep a personal touch and so custom beaded patterns to look like leaves, wreaths and wheat. She also customised her shoes by adding matching beading to them as well, which was pretty painful on the hands!

For Mark, Firuze gave him the gift of a made to measure suit at Cad & The Dandy, Savile Row. As it was an engagement gift, she went back to the same spot where he proposed to give him the gift. He spent a long time looking for accessories but in the end took Firuze’s advice of Grenson shoes, a navy blue silk tie and an unusual pocket square that reminded us of the china plates at home!

We’re big on cooking, so we really wanted to fill the space with herbs and hops. We managed to keep the theme as flora, rather than flower, so it was fresh and green rather than floral. Firuze is fussy on flowers and only likes white ones, so she included them in her bouquet and his boutonnière but kept everything else green. One day we saw an image of a circular altar back and had to have it. Kirsty ended up making the frame from scratch and covering it with green vines and leaves. It became the backdrop for our ceremony as well as at dinner. It was so unique and we’re so pleased with how it turned out.

We specifically chose the most minimal ceremony possible because we weren’t keen on the idea of fluffy, unnecessary words from the registrar. Instead we wanted the meaningful words to come from friends and from each other – the registrar actually joked that he’s never had such an easy job. Our two readings were delivered by friends with a passage from Phillip Pullman’s The Amber Spyglass, Mark’s favourite book, and the wedding vows from George R R Martin’s A Game of Thrones, because we both love the story. We wrote our own vows that were a mix of traditional vows, personal ones and funny ones. We try to fulfil those vows often, like Mark always giving Firuze the oyster from the chicken, and Firuze always tasting Mark’s beer when he asks her to, even though she doesn’t drink beer!

Everything about Miss Gen’s photos looked high quality. We looked at a few different photographers and they were either really inflexible or their style was quite dark and grunge, which didn’t suit our theme at all. Miss Gen has an amazing eye and so we had some incredibly unique shots that we’ve never seen done by other photographers, and even weren’t repeated by Miss Gen. It really feels like she has captured us in a brand new, unique way.

Miss Gen really understands what it means to be a wedding photographer. Small things like knowing where to stand and how to be invisible, while getting the shots she knew we wanted. Her experience meant that she was able to give us advice on our wedding from start to finish, not only for great shots but to make sure we had a great wedding without having to worry about it being captured. We also encouraged her and her assistant to stay and join in the celebrations!

Our favourite photo is one of us kissing with Firuze’s veil flying in the wind. It’s perfectly unique and literally stunning. We’re also a fan of our photo of us drinking shots outside the pub once we married, as well as the series of photos of us practicing our first dance. When the shots came back Mark wasn’t prepared for them. The slide show actually had him blubbing over his dinner and there are so many amazing shots it’s hard to know which ones to frame.

Firuze and her wedding party walked down the aisle to ‘Riptide’ by Vance Joy, performed by David J Alexander. This was a song that Mark taught Firuze how to play on the ukelele, so it has a lot of memories for us. When we walked up the aisle after our kiss and during the confetti toss we played ‘Ho Hey’ by The Lumineers. This has been our song since the beginning, but isn’t too easy to dance to so we wanted to include it once we said I do. Our first dance was “Home” by Edward Sharpe and the Magnetic Zeros. The lyrics are something we say often to each other, and we were able to practice a country swing dance to go with it.

Traditional weddings are for traditional people. Make your wedding yours, break the rules and add whatever you like. As long as there’s food and drink the rest of it can be everything you want it to be. Don’t give in to pressure!