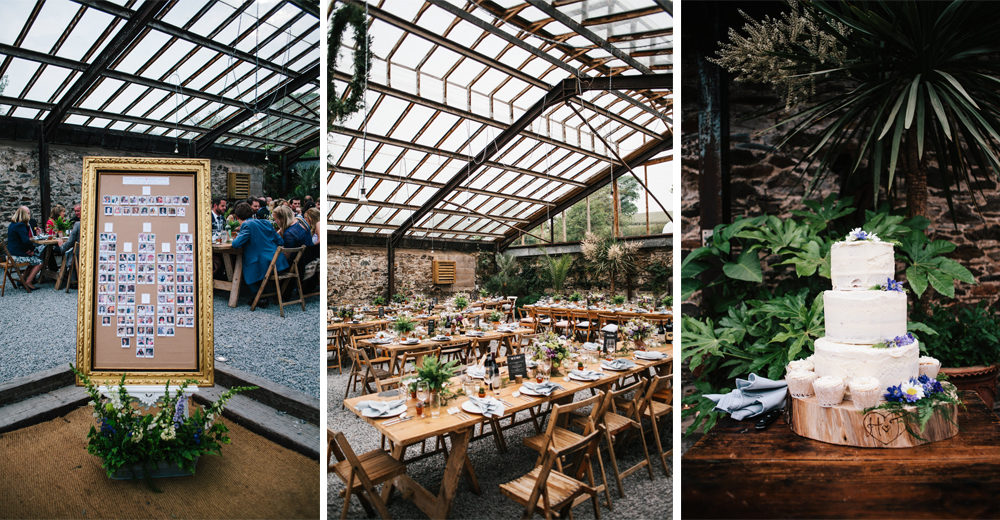 Hannah and Tom’s lovely wedding at the stunning Anran in Devon is going to make you all swoon. What I love about this venue is that there are so many different spaces for guests to move through – all with real agricultural charm, but with the luxury of an elegant farmhouse for accommodation and complete exclusivity for you and your guests.

Hannah and Tom filled the glasshouse area with plants and rustic details which makes everything look really cosy and inviting. To bring a touch of sass to proceedings, Hannah wore Rime Arodaky, a French designer who should most definitely be on your radar, if she’s not already – Rime’s a major part of the reason why bridal is cool again. And Hannah looks utterly ravishing too.

Hannah the Bride: Even before we got engaged, we both knew we wanted a relaxed wedding without any pomp and ceremony. We just wanted to have a fun day with our family and friends rather than doing all the traditional wedding things which people expect you to do. We found our venue by just googling. We live in London but wanted to get married in Devon as we both have really happy memories and family connections there, and Anran had everything we wanted – we could stay on site, take over the whole place and make it into a proper weekend celebration. We saw a few other venues but they weren’t as special as Anran and were a bit ‘factory wedding’ – with one wedding in one day and another one the next. Mike and Edwin (the owners) were so relaxed and said the place was ours to create the wedding we wanted. It was also really important to me that the venue allowed dogs as I wanted my family dog, Bella, to be there, and Mike and Edwin both love dogs.

As the dinner was in a glasshouse, we didn’t need a huge amount of décor – the space was already stunning and had lots of greenery already. I wanted to go very natural with the flowers rather than traditional roses and gysophila, so we opted for potted ferns on all the tables and fern leaves spread along the centres, interspersed with some flower pots filled with wild flowers to reflect my bouquet. Our food was served family style on the tables to keep things informal, so we needed to keep quite a bit of room for the platters on the tables. We chose to give each guest a little succulent as favours, to tie in with the glasshouse location. They also added to the décor on the tables.

My best woman and I (I called them best women instead of bridesmaids) styled the venue in the couple of days leading up to the wedding, and then our florist came in and added the beautiful plants and flowers the day before. As our wedding party was all staying at the venue, everyone pitched in and helped with the set-up which was invaluable, and really fun!

We really wanted as many people involved in the wedding as possible, so my mum, mother-in-law and some friends collaborated on the cake which was really special, one of the best men constructed the table plan using polaroids of each guest, one of my friends, Ali, made the table numbers, I collected hundreds of jars and spent hours gluing twine around them to make candle holders – helped by my mum and best women! Instead of getting a videographer, we bought a camcorder and got our friends to pass it around, so we got different perspectives of the day. We didn’t want a slick, produced film, so it was perfect for us.

I wanted my best women to wear what they were comfortable in and something which reflected their own personal style, so I gave them all a budget and a loose brief in terms of theme and colour palette, and they all chose their own dresses. It worked out really well – they truly looked like best women but they all looked like themselves, which was exactly what I wanted.

I spent a LOT of time trying on different dresses before I made a decision, but Rime Arodaky was my favourite from the beginning. I didn’t want a traditional wedding dress and I knew I wanted something simple, but it took me a while to make up my mind…even dragging my Mum to Paris to see the new Rime Arodaky collection before it came out in London! I think my problem was that I took too many people along when I tried dresses on, and too many different people. I had so many different opinions I was really conflicted over what to choose. I also really wanted something I could keep and wear afterwards. In the end I opted for a lace biker jacket as my cover up (also from Rime Arodaky), and I’m so glad I did as it really added a modern edge to my bridal look and I can wear the jacket again so it’s something special I’ll have forever. My sister is an amazing stylist, and she sent me a link to the Gucci shoes I wore on Net-a-Porter – she always gets it right so I ordered them straight away!

For my make-up, I went with Kelly Hooper who owns and run The Barn, a fabulous beauty salon in Somerset. I went there for my trial and got an amazing facial whilst I was there! Kelly immediately got the natural look I was going for and gave me some great tips – I ended up going with her recommendation of getting LVL on my lashes instead of lash inserts, and it was brilliant. On the day she was really calming and wonderful, and was an absolute hero when we had a slight issue with the dress (we hung it up against a wardrobe and some wood varnish transferred onto it during steaming!) as she happened to know the owners of Mews Bridal, so she just calmly called them up and got their advice and it was all sorted! For my hair, I had actually originally booked another hairdresser a year in advance, but she got in touch three months before to say she had double-booked me so had to find someone else with not much time to go. I sent out a plea on Facebook and was recommended the wonderful Ro Abell, a London stylist who moved down to Cornwall – and I’m so glad I ended up with her instead of the previous hairdresser as she was amazing.

Tom always gets his suits for work made at Graham Browne so it was a no-brainer, we went together and chose fabrics for his suit and decided to add a waistcoat to make him stand out from his groomsmen. Tie and socks from Liberty, shoes from Church’s. Vintage cufflinks were a gift from the bride from Susannah Lovis jewellers. The Groomsmen wore their own navy suits, and ties and socks as gifts from us from a selection at Liberty.

One of our favourite parts was the ceremony, it was so special and personal. My dog even came up the aisle as a best woman! During the hymns she got out of the pew and stood in the aisle, it was so adorable! We had some beautiful readings, including a poem written by my Grandad (read by my sister), who had died unexpectedly a couple of months before the wedding. I never imagined that he wouldn’t be there, so it meant a lot to have a small part of him there. One of my best friends and her husband also couldn’t attend at the last minute, as their baby was born early and then became very unwell. They were going to play a cello and violin duet in the ceremony, but they very sweetly recorded the duet and we played it in the church which worked beautifully, and it was so lovely to feel like they’d still been a part of the day.

One thing I have to mention is the food. I cannot recommend our caterers highly enough. The food was SO incredible, and so many people told me it was the best food they’ve ever had at a wedding. In fact people are still mentioning it now! I’m really pleased we went for the ‘feast’ option (served family style on the tables), as it really added to the informal feel we were going for rather than white table clothes and being served each course by waiters.

The speeches were really special too, they were all so good! I also did a speech and really enjoyed it, I wanted to be able to say thank you myself and talk about how wonderful my husband is, rather than the men doing all the talking.

As a little bit of extra fun, I decided to get a load of temporary tattoos and set up a bit of a temporary tattoo area for people to get involved with later on. I thought it might get ignored but guests absolutely loved it! There were tattoos going on everywhere! It was a really easy and cheap way to add another personal, fun touch.

After the band’s set was over, Tom and I led the guests over to the very cool converted Nissen hut for a further surprise DJ set which was really fun. We also had a firepit ready to go by the hut with blankets and marshmallows – that was the beauty of having the whole venue for the weekend, we could stay as late as we wanted and make of it what we wanted. We had actually planned on having the reception drinks in the courtyard surrounded by the farm buildings, but as it decided to rain we had the drinks in the hut instead, which worked really well. Yet another bonus of our incredible venue. They also do B&B there so we will be able to go back in years to come, making it even more special for us.

Our photographer was Rebecca Rees at A Thing Like That. We wanted someone with a relaxed style, and crucially I really wanted a woman as she was going to be around in the morning when we were getting ready, and I felt I would be more comfortable with a woman around. Rebecca also brought a second photographer, Heather, who was equally brilliant and lovely. We are thrilled with the photos and would highly recommend Rebecca.

We didn’t have a videographer, instead we bought a camcorder and passed it around different friends which was really fun and personal.