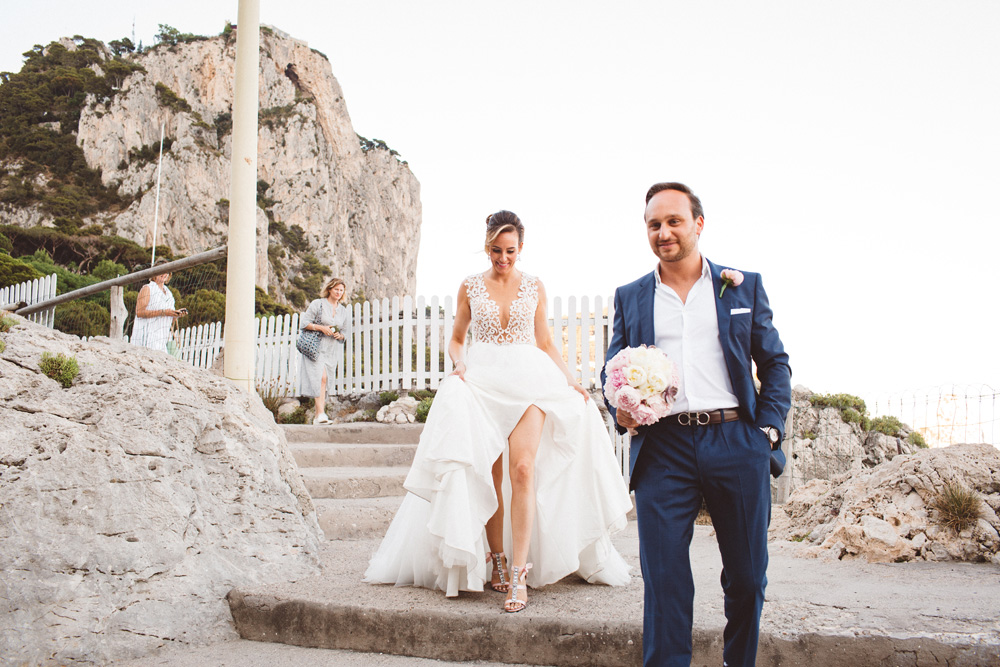 Once upon a time this gorgeous couple met on an aeroplane and parted ways, but fate decided to reunite them. They dated for a couple of years before getting engaged in Paris, which brings us to their breathtaking wedding in Capri, Italy 11 years later.

The intimate destination wedding is just as heart warming as their romantic story, with a first look that will make your heart ache and stunning scenery that will make your eyes bulge. Plus bride Jaimie looks an absolute vision in her Calla Blanche gown and Bradley Mischka shoes. Talk about goals.

All the love and pretty has been captured by Paolo Ceritano whose reportage photography really encapsulates the emotion of this glorious day to perfection.

In 2006, on a flight to Jamaica, Derrick’s friend told him to take a picture next to a random girl on the plane. While taking the picture, he jokingly said this will be your wedding picture. Little did Derrick and Jaimie (the girl on the plane) know they would be married 11 years later. Derrick and Jaimie kept in touch after the Jamaica trip, but would not start dating until 2009. As fate would have it, Jaimie started working in New Milford, NJ, (Derrick’s home town and where he moved back to after college). Not really remembering any of this, Jaimie texted Derrick that she has moved to North Jersey, after a brief discussion, Derrick realized Jaimie had rented an apartment approximately 1000feet from his parents house completely by chance. Derrick and Jaimie started dating and moved in with each other in 2009. Got engaged in Paris in 2015 And married Capri, Italy in 2017

Jaimie the Bride: Our wedding was beyond our expectations. After we got engaged, we started the wedding planning process. After doing many hours of research on wedding venues, flowers, music..etc and taking into consideration our hectic work schedules, we agreed we did not want a traditional wedding. We wanted to do something outside of the box, that was relaxing, and that really allowed us to focus on only each other for that special day. We let our family and friends know that we decided to quasi-elope. We decided To take all the money we budgeted for the wedding and spend it on a once in a lifetime ceremony and 2+week vacation. After researching destinations across the world we decided on the island of Capri Italy, based on it’s beauty and romantic nature. Once we had the destination set, it was time to choose a photographer. We did not want a typical local wedding photographer, we wanted someone who was unique and had great eye for scenery and capturing moments. I searched #destination photographers on Instagram and found Paolo Ceritano.

After going though his IG posts I knew he was the photographer I was looking for. Since the first communication he was extremely professional and truly caring about the wedding shoot and what we were looking for. From start to finish everything was perfect. Including the impromptu pre-wedding shoot on the Brooklyn Bridge in NYC.

Since we were not familiar with Capri we knew we needed a wedding planner for my hair/make-up/flowers/officiant and overall planning of the day. Lucky for us, Paolo introduced us to Anna Chiatto, wedding planner extraordinaire. She made everything on our end so relaxed and simple. We told her what we wanted, and it was completed beyond our expectations. Anna made sure every step of the wedding day was done to perfection, from the renting the Augustus Gardens for the ceremony to the Private Boat ride around Capri to a private table at the greatest lemon tree restaurant in Capri. Everything she did was 110%.

Jaimie and I dubbed Paolo and Anna the #DreamTeam because of how perfect everything was executed. Overall the day was exactly what we wanted. A relaxed wedding day in one of the most beautiful places in the world, allowing Jaimie and I to focus on our love for each other. The Capri wedding was followed up with trips to Venice to Rome to Santorini to Athens to Budapest to Berlin. A once in a lifetime trip!