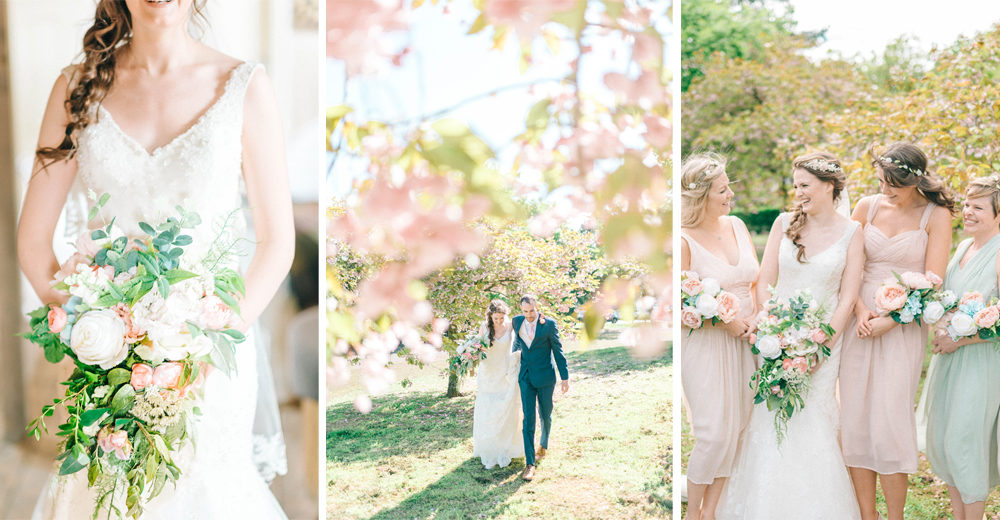 The very lovely SJ Ethan and her husband Matt are photographers who grace these pages very frequently. We love their light and bright style, it’s soft and romantic and they always capture a great range of natural, reportage style shots, as well as fun and happy group shots.

But this wedding is a rather special one, with both of them taking it in turns to shoot, as Jen just happens to be SJ’s sister

I love the handmade, rustic feel to her and Roshan’s big day, there’s a lovely homely, welcoming vibe in all of the photographs and Jen looks stunning in her gown too. Look out for the epic dessert table and sweet bar. Oh and the dreamy couple shots amid the Spring blossom – all the heart eyes.

Jen The Bride: I’ve always been drawn to the bohemian look so as you can imagine our wedding reflected this. Even apart from the aesthetics, the feel of the day was very natural and although there is always lot to plan before hand there was a beautiful sense of freedom to the day (mind you we had many a
wonderful friend and a super organised maid of honour, Sarah-Jane Ethan who was also our part-time photographer scouting around at the speed of light helping plans to run smoothly).

Our day started with having my hair and makeup done by professional hair and makeup artist Rebecca Galloway. I had extensions put in my hair and she fashioned my locks into a boho inspired loose plait. I’ve always been a fan off a curly slightly unkempt style. So I wasn’t interested in having every hair placed pristinely. She deliberately pulled certain parts out of the plait and then left some wispy strands loose to frame my face. In our previous experimenting we had decided to have my hair brought around to meet the plait by way of two separate plaits, one on top of the other. It was a great idea as it was slightly unusual but served well at really holding all the hair to the side for longer. I chose natural makeup to accompany it. A nude pink lip shade and brown/nude eye shadows, although I wore eye liner it was not enough to look overpowering.

Although it took a while to find my dream dress, I ended up buying a second hand Justin Alexander designer dress on pre-loved and had the straps altered to hug the end of my shoulders. I wore no jewellery, as my dress had lots of delicate sparkles dotted around. However I did wear a sparkly floral head crown, which created some interest.

My husband obviously wasn’t adorned with any sparkles but he certainly dazzled in his electric blue suit with pink tie to match some of the bridesmaid dresses. His ushers wore the same. My beautiful bridesmaids wore dresses in three different shades, soft pink, peach and mint (inspired by a pinterest picture) I gave them all bunches of forever flowers, each one had three different shades of flower in them. I loved the idea that they their flowers would last and they could take home their bouquets to serve as a memory of the day.

I made my own bouquet. Similar to before, they were not perfectly placed. Some stood higher than others and I surrounded them with lots of real leaves which I had picked the day before. I had the church hall decorated with the same types of flowers. They were wrapped around a white shabby chic arch and secured with thin wire and had a flower stand either side of it. One of my favourite ideas was to double up wall hangings at the ceremony into table centre pieces at the reception venue. I had forever flowers and real leaves trailing down from 10 large white open lanterns which hung around the room on 10 pillars moved from the ceremony to then be placed on our 10 tables at the reception. They were large enough to be a display feature and the flowers and leaves that were originally hanging were just wrapped around the base of the lantern to look like a nest.

The reception room itself almost looked like an indoor circus gazebo. We had a rope attached to a hoop in the centre of the hall holding up 2 LONG thin white sheets, which sagged in the middle and draped around the room. Accompanied by a vintage fun fair (which we hired from a friend of a friend), whack a rat, hook a duck, hoop a bottle and coconut shy the day really felt like an indoor fun fair. We also had a sensational sweet and cake table (made from jars we had saved and sweets bought from a wholesalers), photo area and pin the ring on the bride and bow tie on the groom (hand-made by my sister). There was something to keep everyone entertained. My sister created an epic desert table to display the cakes that we had asked around 30 guests to bring.

The majority of our decoration were decoration that either myself, my sister or my mum already
had in our houses! Fortunately we all have the same style. Being a designer myself I had made placemat for everyone with questions for them to fill out. We asked everyone to write a short story about the bride ad groom starting with ‘once upon a time’ and had the best ones read out an the winner given a prize. There was also a section to write the funniest joke you could and we rewarded it just the same. Just with a jar of olives this time! It was important to us that people met and really got to talk at our wedding and so we created a ‘get to
know you’ game. We gave everyone a small sheet which had 10 things they needed to seek out by talking to others, such as, ‘someone who has won a game of poker’. All the questions related to things my now husband and I have done in our lives.

Our wedding cake itself was hand made by my friend Angel and was particularly special as it was gluten and dairy free!

People described our day as a ‘fairytale’ and I’m so pleased. There was certainly a lot of laughter. Our day was photographed by the amazing Matt and Sarah-Jane Ethan. We loved their light, bright natural vibe. Capturing emotive pictures of people at just the right second. Its certainly rare to find pictures as bright and vintage looking as the ones they take. I couldn’t recommend them more highly