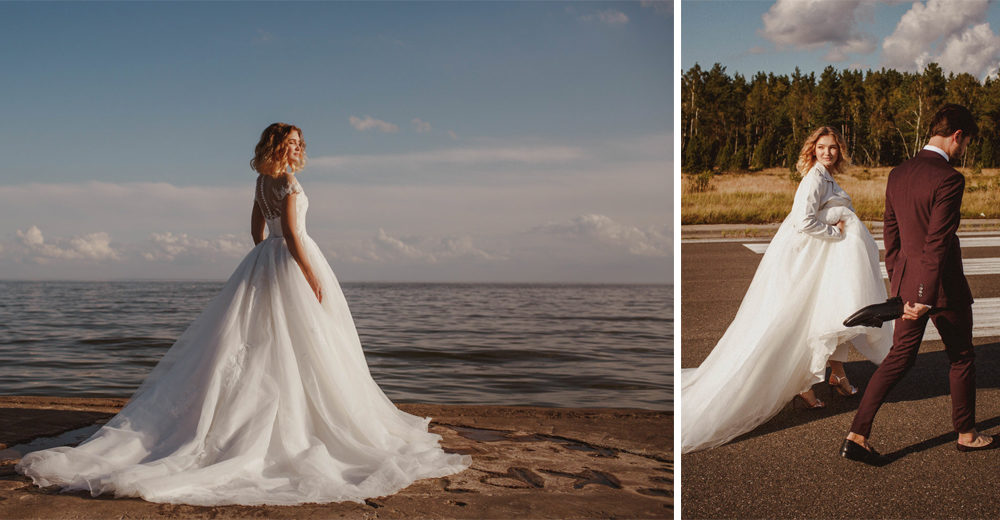 Karolina and Martyn married at a beautiful wedding venue in Lithuania, with Karolina wearing a stunning St Patrick gown and Martyn sporting a sharp bespoke burgundy suit. They both look utterly gorgeous and make such a striking couple, especially against the gorgeous backdrops of Nida – a pretty resort town with sea on one side and forest on the other. Which obviously made for some dreamy portrait shots, and these two are so hot, their photographs look like a piece of editorial!

Images come from the amazing Motiejus, who captured the day beautifully and tells us he loved photographing an intimate wedding, as he could really delve deep into the emotions of the day. That’s certainly clear in the resulting images, which are simply beautiful and full of joy.

I’ve shot the wedding of Karolina & Martyn in a wonderful location in their home country Lithuania – Nida. Nida, it’s very unusual place. It’s a small resort town with approximately 1500 residents located on the Curonian Spit between the Curonian Lagoon and the Baltic Sea. From a photography point of view – it’s an absolute dream where you have Sea on one side, loads of forest, dunes, abandoned airport and a lagoon on the other side. If you ever end up travelling to Baltic countries – this is a place not to be missed for sure. The wedding itself was a small and intimate with only 50 closest people and that allowed me to really integrate and feel the atmosphere and focus on people and emotions while documenting it. The biggest challenges while shooting were dealing with constantly changing lighting.

Another thing to mention was locations during the portrait session. Even being a small town travelling from different locations was quite a challenge in order to make sure we stick with a timetable. We have spent no more than 5-10 min in each place and really needed to be quick and efﬁcient. Luckily, I have worked with the couple before so we knew exactly what we are doing. Last thing worth mentioning is our crazy idea to hire a white horse. Apparently (as you can see in one of the images) he wasn’t a calmest one and really made us scared. Luckily, we got out of it alive and it was deﬁnitely worth the efforts. As for the rest day itself, it was a deﬁnitely magical and very emotional day to capture and I’ve stayed dancing with the couple until early morning hours.