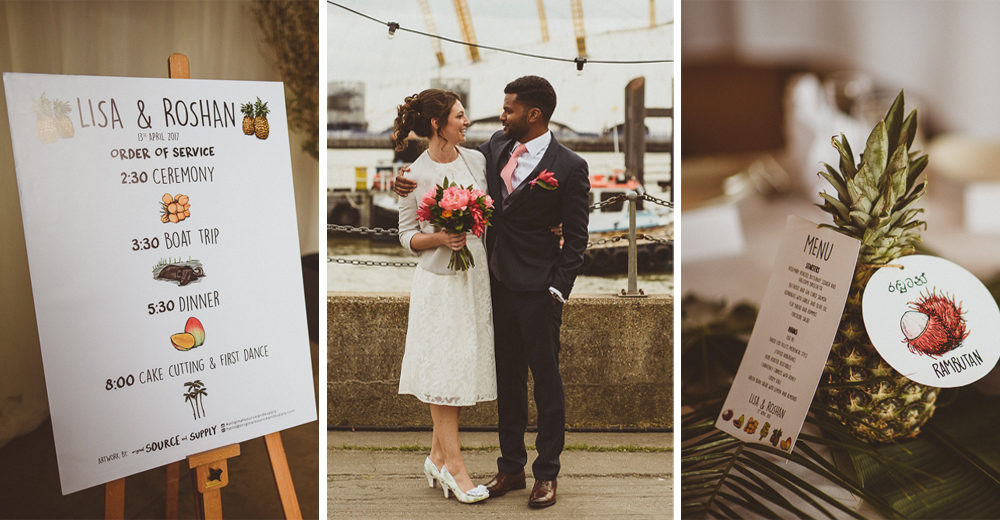 Roshan & Lisa travelled over from Sri Lanka & held their wedding at the fabulous Trinity Buoy Wharf in London. If you’re not familiar with the venue, it’s a stunning dry hire warehouse with a pretty wooden ceiling that you can fill to your hearts desire with decor and details to suit your theme, it’s right next to the river Thames too with absolutely stunning views of London, making the perfect spot for couples portraits, as you’ll see captured beautifully by Matt Penberthy.

In this case the theme was fabulously fun & tropical, with tons of fairy lights and a giant disco ball hanging from the rafters. The centrepieces consisted of botanical leaves, pineapples and gorgeous wedding stationery made by a friend, and have undoubtably put a huge smile on our faces (you know how we feel about pineapples).

Bride Lisa looks stunning in separates from Ted Baker, with her Irregular Choice shoes adding the perfect finishing touch to her sweet outfit, not forgetting her delicious colour popping peony bouquet of course.

Lisa The Bride: My husband and I are British but live in Sri Lanka where his family are originally from, so we wanted to add a tropical touch to our London wedding. We decided to have the table names based on Sri Lankan fruit, plants and animals and for the centrepieces to be fresh pineapples. This also meant that guests could take them home for a tropical snack the following day! We asked our friend Martina to design all of the stationery for the wedding. She runs a design/illustration company called Original Source and Supply Co. and currently lives in Sri Lanka so she really understood our brief and produced some amazing illustrations.

We found the venue (Trinity Buoy Wharf) just through looking around on the internet. As soon as we found it I thought it would be great and when we went to visit I could already imagine the day there. The Chainstore is one big warehouse so they need to rearrange it for the meal and said that we could either have had a drinks reception outside (but at the mercy of the unpredictable April weather) or take a trip along the river in a boat. We decided to take a boat trip, which was great as it really helped to make the day a bit different and was particularly fun for those guests who were visiting from outside of London. TBW also offer a wedding planning service which we found absolutely invaluable seeing as we live abroad! Helen, our wedding planner, was incredibly well organised and brought up so many useful things that we simply hadn’t thought of that made a big difference to the day. The venue is a dry hire, although they do offer extras that you can get such as olive trees, drapes, lights etc. They don’t have certain suppliers you have to use for catering etc., which means you have got a lot of freedom to do things as you want them.

Organising a wedding from a different country can be stressful in some ways, but it was quite good in that it helped us to prioritise the things we really wanted and not get caught up in little details that we might have worried about had we been in the UK. Our parents were incredibly helpful in sorting out lots of suppliers for us, so it would have been quite a challenge if they hadn’t been able to help.

The ceremony was in the middle of the Chainstore with the big doors open looking out to the river. The sun was out during the ceremony, which meant that we got some lovely photos. The ceremony was very short – no readings or anything, so we had more time for celebrating afterwards!

Our photographer was Matt Penberthy, who we found out about through a friend. We had a look on his website and were really impressed by the shots he’d taken of other weddings. He was friendly and communicative beforehand, we had a chat over the phone about what we wanted and the kind of thing he does. He was relaxed on the day and very good at blending into the background so we had lots of nice naturalistic ones of people enjoying themselves. He also gave us our photos very soon after the wedding, and we had a slide show of highlights, access to a digital library as well as hi-res images on a USB and a few select prints.

Our florist was Wildfire Flowers, who were really friendly and helpful. They sent us lots of pictures to help us come up with a clear idea of what we wanted. We kept the flowers quite simple, just two bouquets, button holes for groomsmen and parents, flowers for the cake and an arrangement for the registrar’s table. The florist also made the centrepieces with the pineapples and tropical leaves as well.

I’m not a fan of big bridal gowns, I tried on a few and they just weren’t me. I also wanted to be able to move easily and dance at the end of the night! I got a lace cropped top and A line skirt from Ted Baker, I found them really comfortable so I’m even planning on wearing them again (separately, of course!). My shoes were from Irregular Choice. Most of the shoes I tried on were far too high, but I knew I’d be able to wear these all day without regretting it later and I loved the fact that they looked bridal but with a hint of the tropics!

Roshan wore a blue Hugo Boss suit with a grey waistcoat that he had made on Kingly Street and brown shoes from Russell and Bromley. His tie was coral pink and we got it in Sri Lanka.

My bridesmaid Rachel also wore a blue dress from Ted Baker and the groomsmen had matching blue ties from Charles Tyrwhitt and wore their own suits. Both of our mums also ended up wearing the same shade of blue so it looked quite good in the photos. My friends Sam and Emily did my hair and make-up, which really helped to relax me on the day. It was nice just hanging out and having a chat with them in the morning!

Our wedding rings, as well as the necklace and earrings I wore on the day, were designed and made by SJK Rocks which is run by our friend Sarah, who is also based in Sri Lanka but sells her designs all over the place. She was very good at accommodating our ideas and so my ring was Sri Lankan white sapphires and made to fit around my engagement ring.

My necklace and earrings were Sri Lankan moonstones, very simple but lovely. I originally wanted something a bit more statement, but realised that these photos will be on people’s mantelpieces for decades so you don’t want to wear anything too daring that will end up looking really dated!

We booked the DJ only about a month before the wedding as we originally thought we would just use a playlist, but the DJ was such a good decision. The company is called DJ2K and they have a very well thought out form for you to fill in so they know exactly what kind of music you want, how you want the DJ to be, should they take requests and how to vary the music throughout the night. The DJ (Isaac) played exactly the sort of music we were after and this meant that we could really relax and enjoy the evening. Our first dance was “Let’s stay together” by Al Green and the last dance of the night was “New York New York” by Frank Sinatra for those who were still standing!

The boat company we used was called Thames Cruises. They were quite difficult to get hold of in the run up to the wedding, but were great on the day. We had drinks and canapes on the boat, and then the main catering was done by Hubbub. They were good, although also relatively uncommunicative in the run up, although I think this was mainly due to them being taken over by new management! We had sharing platters for starters and then a few different mains for the table. Neither of us eat meat, so we had lots of nice veggie options and then fish pie and baked cod. The food was great, although they brought it out dish by dish, so for the mains, the cod came out quite a long time after the other food, so some people had filled up on the other stuff as they didn’t realise that more was coming!
We had considered doing a booze cruise to France to get cheap alcohol, but ended up using Laithwaites who do a sale or return offer, which meant that we could over order and not have to worry about things running out or being left with dozens of bottles of wine at the end. Hubbub also were happy to serve the alcohol we brought in, which made things a lot easier.
We didn’t have desserts served after dinner, but we asked our friends to bring cakes etc. which we had laid out on a table with the wedding cake. This was Roshan’s idea which I was pretty sceptical about to begin with, but it was such a great way to cater for different people’s tastes and also to involve people as lots of our friends are good bakers. The wedding cake was a simple two-tiered cake from Marks and Spencer which looked really nice with the tropical flowers on top.