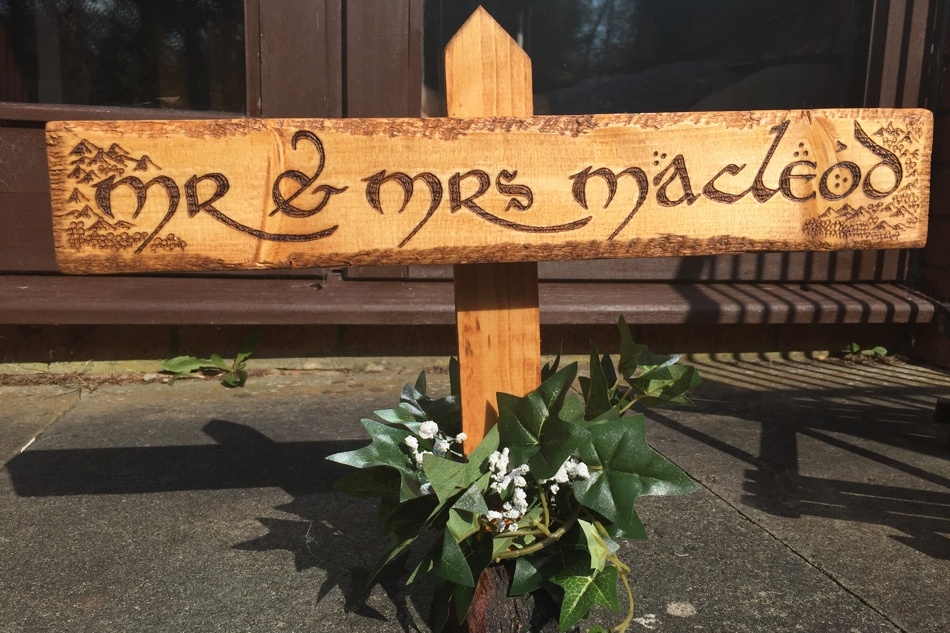 For guest blogger Morgan it’s been another busy month. Wedding ring shopping has been ticked off the list (well for Morgan anyway) and the cat has posed supremely for it’s cardboard cut out. Thoughts to wedding essentials: engraved glasses for the ladies and a Lord of the Rings Mr & Mrs Sign…

“There’s something special about finally being under the 6 months to go till the wedding mark. Given that we’ve been engaged now for just under 2 years (!), it feels like this little milestone has taken forever to come around. And with another month passing, we’ve managed to tick a surprising amount off of the Mega Wedding To Do List. Is Frazer’s kilt one of those things? I’m still shocked to say that it is now officially crossed off the list! Oh the things excessive nagging can accomplish… Well done Frazer. Another bout of nagging and we crossed “Morgan’s Wedding Ring” off the list too!

“Weirdly, wedding ring shopping had become the unexpected bane of wedding planning for me. I always knew it was going to be a bit difficult to find a perfect fit for my ring as Frazer had, in his adorably thoughtful manner, chosen a bespoke Morganite and palladium engagement ring for me (as he excitedly told me, he even got to pick out the stone for it!).

“I don’t wear much jewellery, and definitely nothing with diamonds, so I was completely speechless when he got down on one knee in our living room with the most sparkly ring I’d ever seen in his hand. I don’t think I even said yes for a long time – though as Frazer reminds me, I did laugh and ask if he was joking… I mentioned I was in total shock, right?! I adore my ring, and I love the thought he put into it (what Morgan wouldn’t want a Morganite ring), but because of the large stone in the middle I had to rule out a straight wedding band which pretty much halved the options available to me.

“I don’t know about everyone else, but I was completely lost when it came to choosing what I wanted for a wedding band. I didn’t even know where to start of where to go.

“All I thought I wanted was a completely plain palladium band that would fit round my engagement ring; no diamonds, no sparkle. Ha. Easier said than done! We spent a few Saturdays going around the jewellers in Glasgow trying different options; from bespoke like my engagement ring to straight off the shelf but looked like it might match. 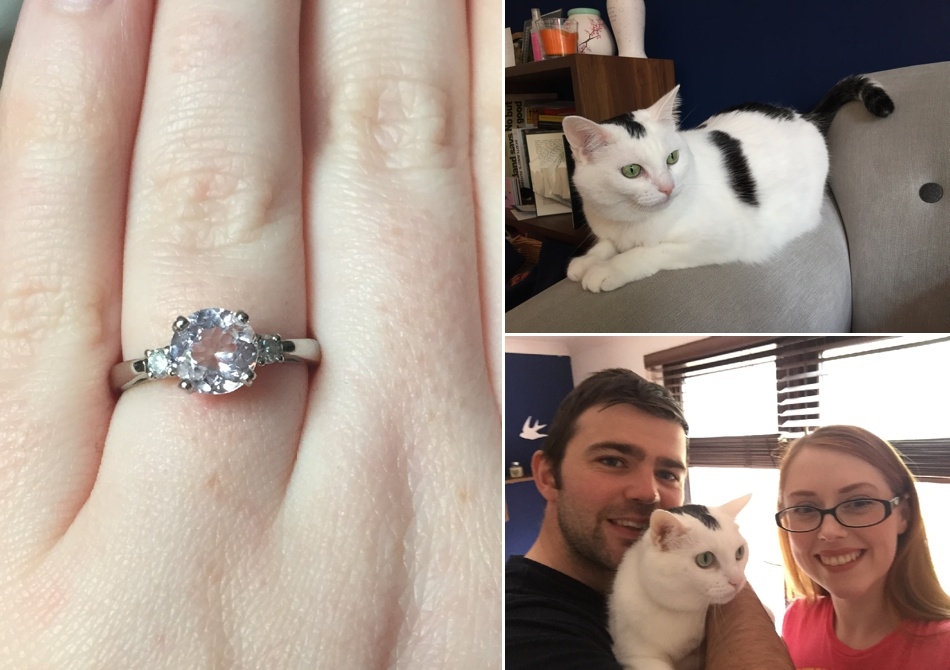 “When I finally picked my wedding band, it was actually different to what I’d imagined. Turns out I like diamond a little more than I admit to myself… We found the perfect ring in white gold (we’ve ordered it in palladium instead) which surprisingly fit snugly with my engagement ring, and had a tiny row of diamonds along the middle.

“We only ordered it last week so unfortunately don’t have any picture of it yet; can’t wait till it arrives though. Is it bad luck to try it on before the wedding? I’m not sure I’ll be able to help myself!

“Frazer meanwhile has brushed off all of my attempts to get him to sort his ring out – just like his kilt; can you see a pattern forming here? Any time I bring it up he does this non-committal face/shrug that probably translates as “meh”. Last time we spoke about it, I heard he was just planning to head over to Argos. Oh well, I guess that’s that then.

“Other than unsuccessfully trying to get the cat to sit still for a photo which can then be turned into a cardboard cut-out of her for the day (we weren’t kidding), I’ve spent a lot of this past month crossing little “bridal” things off the list.

“Or ordering things that we probably don’t need, but which I thought were amazing. A Lord of the Rings themed Mr & Mrs MacLeod sign for the top table, for example.

“When I told Frazer about that one his response was, “You’ve spent HOW much on WHAT?!”, but when it arrived he was won over too. Success!

“I finally made a start on DIY-ing my champagne glasses for all of the ladies staying with me in the venue the night before to use on the wedding morning too. That involved a lot of sticking decals on glasses and hoping they wouldn’t peel off. They all turned out lovely though so while they were an unnecessary expense, I was happy I went for it. 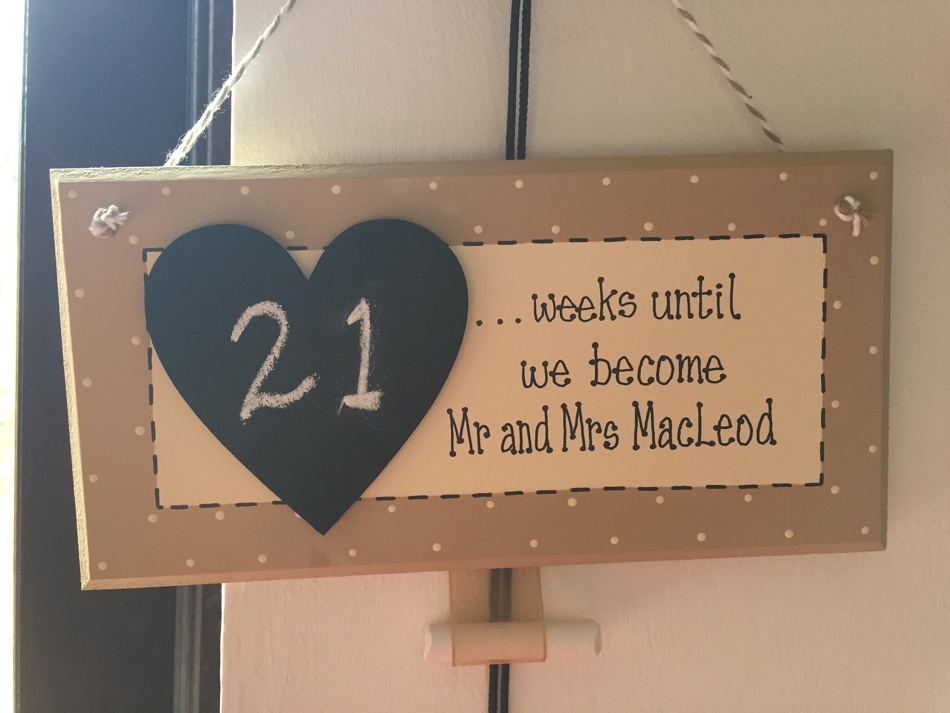 “I also got to try my wedding dress on again on Saturday which was a definite highlight of my month. Buying a dress as far in advance as I did (February last year!) has meant I’ve dealt with a scary amount of wobbles over whether I’d made the right choice.

“My wobbles have been silenced now though! No more worries till my first fitting which will be nearer the wedding. Next month’s worry will instead be bunting, bunting and more bunting!”

Cardboard cut out of the cat? Yup we love this pair’s style… Alie x

Morgan & Frazer will be tying the knot in a Humanist ceremony at Altskeith Country House on Loch Ard, in the Trossachs, this September. They are planning “a riot of colourful tartan, hearts and bookish twists”.
Photos by Morgan and Colin and Connie by M&S