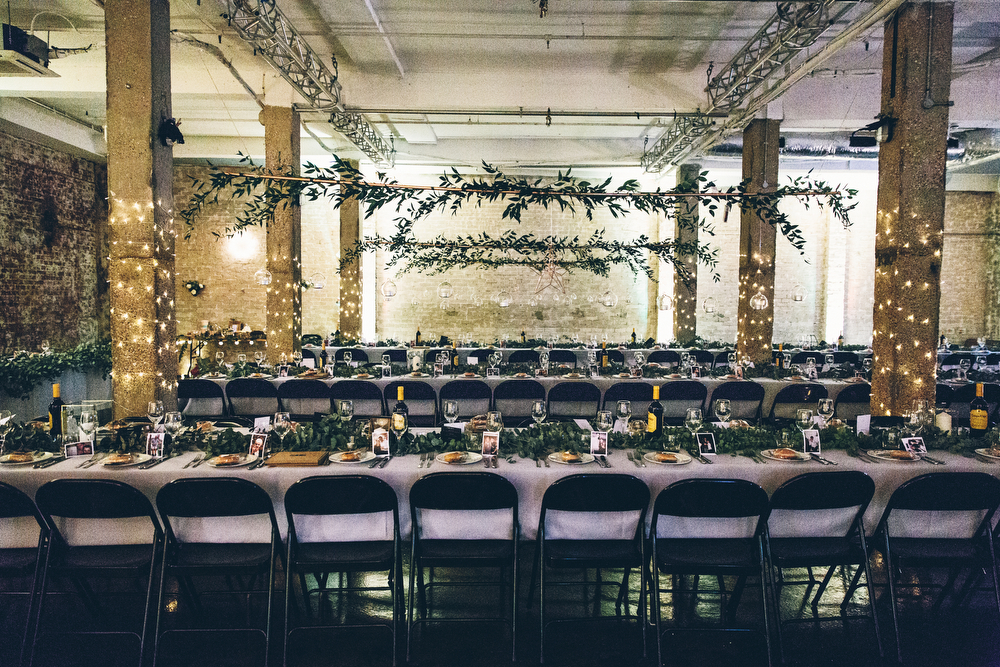 I first saw this wedding when Mister Phill shared a sneak peak on Facebook and happened to mention that his young daughter had essentially second shot for him. I mean WHAT?!??! That girl has some serious skills. Several of the images you see in this feature were captured by her. And sorry Mister Phill, but we can’t tell which ones

Nichola and Marcus had two weddings so we have double the fun for you this afternoon – the chilly but spectacular Iceland elopement and the good old London knees up in a warehouse. It’s an absolute riot from start to finish and I love how the fun just pours from the images. We’ve also included the video filmed and edited by Bride Nichola (and friends), which is such a special way to record the day. Oh and before I let you enjoy this feature, make sure you read all about the couple’s money saving tricks when it came to the food…very clever indeed.

Nichola the Bride: Well this is strange being on this side of the Rock My Wedding feature, and I’m thrilled my own wedding is getting featured! Marcus and I got married in February 2017, for no particular reason other than it’s outside of peak wedding season and I could therefore take a few weeks off. Having been to many weddings myself I had a lot of friends and family asking about my wedding plans before we were even engaged. I didn’t have a clue where to begin; I just knew I wanted to do most of it myself. For those of you interested our original budget was 10k and we went around 4k above.

I tried on over 50 dresses in a number of wedding dress shops and I somehow couldn’t find anything I liked. I spent countless hours scrolling through online blogs and Pinterest before finally coming across the Katie May dresses. I fell in love but there weren’t any in the UK to try on. I ended up finding the Katie May Sienna dress in my size on Preloved; the dress was in the UK and a bride to be had changed her mind. I purchased my dress for under half the price and it was brand new! When it arrived I zipped it up and was so happy it fit. I got in touch with Gill via Story of My Dress (a Kent based seamstress) and she altered it to perfection, shortening it and taking it in at the waist, as well as adding a slightly longer train and some weights so it didn’t clump up. She also added a lace edging to the back and the top. Gill works closely with Cara from Story of My Dress, so I even had my own veil made exactly how I wanted it. If you’re looking for a vintage wedding dress or some amazing alterations I would highly recommend Cara and Gill.

We quickly decided to hold our legal ceremony abroad, and with February in mind we swayed towards the colder climates (so we wouldn’t have to travel as far). We chose Iceland. Marcus proposed to me there a year before and we decided it would be a perfect place to take our families for our wedding and for a mini holiday. Budir Church in Iceland is beautiful. It’s located on the Western coast, a tiny black church in the middle of nowhere. We had hoped for snow (as it was February) but unfortunately there was nothing but rain that week – we still had the best time anyway and as you can probably tell by my hair in the photos it rained rather hard!

I stayed with my family in a little airbnb 15 minutes away and Marcus stayed with his family in another airbnb. I will admit I was around 45 minutes late as I accidentally didn’t wash the shampoo out of my hair! We sat up the night before chatting in the hot tub, drinking wine and making our bouquets out of supermarket bought flowers (prices in Iceland being what they are, probably the most expensive foliage I have ever encountered). My dad drove my sisters and I to the ceremony in our hire car which had accidentally been upgraded for us.

The ceremony was conducted by Pall August Ollafson. We had never met – just spoken over email – but it made no difference; it felt as though he had known us for years and the ceremony couldn’t have been any more perfect. After the ceremony we headed next door to the Hotel Budir for a drink and then drove back to Reykjavik for a family meal out in the city.

I met up with Mister Phill and Amelia (Phill’s eleven year old daughter who actually took some great photos!) at 8am at the Jokulsarlon Lagoon two days after (we drove 2 hours in the dark from our airbnb) We got changed in the car/loos and had some amazing photographs taken in front of the icebergs – exactly the same spot we got engaged at the year before. Totally worth the trip and totally worth the photos.

I wanted an empty room with a late finish time near our hometown in Kent. I looked around a lot online and visited 3 warehouses in London, deciding on Studio Spaces. The space was amazing and was exactly what I was after. I did struggle a bit with the venue over a few things and I would suggest you do your research into whether they allow certain things before booking. For example,
the venue doesn’t allow gas to be used, which did cause a few problems regarding caterers. We arrived at 8am and set up the venue that day before the guests arrived.

All of my flowers and foliage were done by my amazing little sister, Kristy. She’s very creative and I’m trying to convince her to start her own business! They were perfect, even better than I had imagined.

Joyce and Hayley are a mother daughter duo that knew exactly what I was after. I felt amazing once they had finished with my hair and makeup and I really think that hiring a decent hair and makeup stylist is a really good idea. Can’t recommend these two lovely ladies enough.

I designed all the stationery myself and collected lots of terrariums, candles, napkins…I even painted the sign behind the ceremony a few days before the wedding (haha). I cut up pieces of biodegradable paper and made confetti bags, I made doughnut bags…it took a lot of time doing it all myself but looking back now I am really happy with how everything turned out. I had pictures printed of all of my guests, and ordered Krispy Kremes for favours. I created glitter kits to decorate everyone’s faces/beards (did I mention we told our guests to grow beards for a beard competition? (Strange but highly entertaining!) We had glow sticks and cigars for our guests. I then had a charity bar at £1 a drink to raise money for the Kent Hospice who looked after my nan before she died last year. We raised just under £400 for charity in the evening.

I chose two street food stalls for our catering and made our starter boards with meats and olives from supermarkets. I had fresh bread delivered on the morning for the starter boards and Ben & Jerry’s ice-cream delivered for dessert to go with the home made brownies our friend made. We chose Cheeky Burger and Jamon Jamon for our main meals. The burgers and paella went down a treat! Canapés were from M&S and I created a cake/sweet table with cakes from M&S, Tesco and Waitrose. At midnight I had a groomsman walk to the McDonalds down the road and collect the burgers I had ordered for the midnight munchies! These were served by the best men on trays to hungry guests.

Helen and her team were amazing on the day and so organised. They helped make the day exactly how I imagined it and served the drinks we had bought. Thanks to our family friend Kev for becoming our Registrar

Nick is probably the best singer ever. Along side Ed Sheeran – Although Nick would still give him a good run for his money. I saw the Indie Killers at one of the first weddings I had photographed. I booked them without any hesitation and I can’t begin to explain how good they were. The dance floor was full the entire evening and its mainly down to these guys! They even learned our favourite James Bay song for our first dance. I hired Silent Disco headsets for in between the band sets – guests loved them.

Mister Phill was always going to be the guy to photograph my wedding. It was actually him that inspired me to become a full time photographer so as soon as I was engaged I emailed him to see what dates he was available (and if he’d like to come to Iceland!) The photos are fantastic, and they really tell the story. Each and every photo makes me smile or laugh and I’m so glad we chose Phill (and Amelia his daughter) to photograph our weddings. Not only are his photos amazing but he was such great fun to have there on the days. Thank you Mister Phill (and Amelia) for being awesome and hilariously fun.

Thank you to everyone who made it the best days possible. We had such an amazing time and it wouldn’t have been the same without you.

For those of you getting married, doing it yourself is rewarding in the end but it does end up costing a lot more than you think (and takes up many, many hours). During the build up I did keep questioning why I didn’t just book a venue that did it all for me!