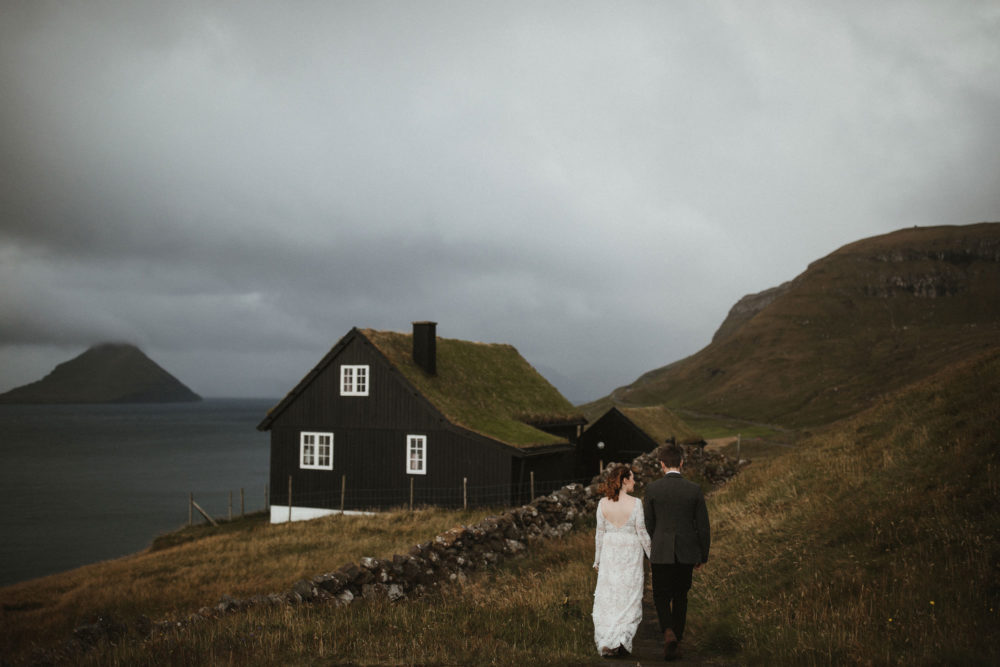 You know you’ve done the right thing when family & friends who learn of your recent elopement say “that’s so you” Plus the fact that you’ve always dreamed of climbing the mountains just you and your beau saying I do in an intimate ceremony.

James Frost Photography takes us on the journey with our adorable couple Ruth & Aengus, capturing all the wonders of the Faroe Islands, just North of Scotland, as well as all those off the cart adorable moments by the happy couple.

From the first look, to the warm embraces, get ready for your heart to swell.

Ruth the Bride: I have never wanted a white wedding, and luckily, I found a husband that felt the same. After we announced that we eloped with little postcards crafted by Aengus (he is a graphic designer) and the perfect photograph by James, we got the same response over and over: ‘That’s so you’.

My uncle remembers me announcing as a young teenager that if I ever got married, I’d probably run away somewhere and do it on a cliff top and you’ll hear about it after. That was my dream.

After eight years together (we met in a small art school in Limerick, Ireland and we’ve basically been inseparable since the day we met) Aengus ‘proposed’ to me on a little row boat in central park, NYC. I put proposed in quotation marks, because although the setting was romantic, and I found out later that he was nervous as hell, we had said for years that we’ll get married, and I didn’t want an engagement ring (it would be a dead give away for the elopement!) so he asked me to marry him and I said yes of course, you know I will, and we went back to our normal conversation. Only later back in Ireland with a glass of whiskey in hand, did we start really planning.

We are lucky that we have families that are supportive of us both, and our decision to do something a little different. We decided to tell our immediate families straight away that we were putting the plans in motion to get married, just the two of us, and wait for everyone else to be surprised after we came home as husband and wife. (If there was a hint from either of our families that they weren’t ok with it, we would have done something different.) Aengus’ parents got married in a ceremony just the two of them, and I was the third of three girls who had beautiful white weddings, so being the third – I got away with sneaking off.

So, we knew we wanted to elope. We always wanted to go to the Faroe Islands because they looked like the most magical place on earth, (turns out they were even better than we could have imagined) with almost no one around, so we thought lets do this.

As a photographer myself, I had followed the work of James online for years and absolutely adored his epic landscapes, and the way he told love stories, and so I dared to dream that he was free to do our wedding (I say he was free – if he wasn’t free we would have changed the date! It’s not like we had much other things to change)

I had read a lot of blogs and articles on elopements – would we regret it? Would we miss our loved ones? Would we feel lonely? But we have both agreed since, that it was easily the best day of our lives. I did my own hair and makeup, and we started the day with a nice flat white getting ready together in our air bnb, and from there the day was perfect. We exchanged handwritten vows on a cliff top, we laughed, we cried, we took photographs around the island with a photographer who turned out to be just like a friend to us, we got caught in the rain, we came home and had our first dance together in our apartment, and cried again, and we went for the most romantic meal with delicious food and the best red wine we’ve ever tasted (we’ve since wondered if we were just that happy that anything would have been the best wine ever tasted).

After coming home we had a little party to celebrate, with no fuss, just friends family and beers, and a slideshow of photographs by James to show the magic, and it was absolutely perfect.