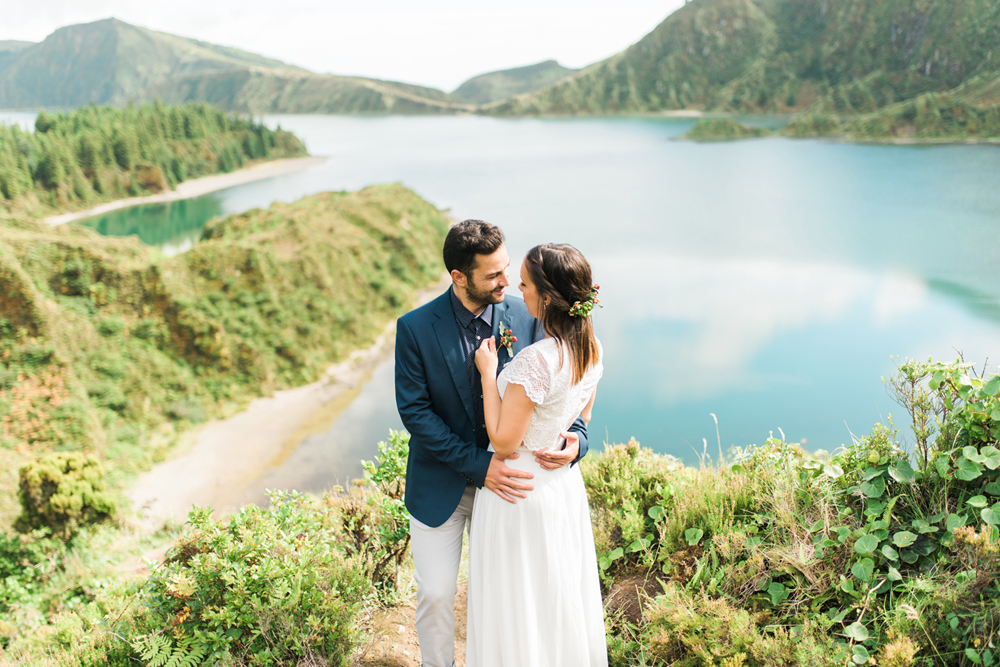 This morning we’re heading to the Azores, for an elopement in a volcano. Don’t worry it’s no longer active, just incredibly beautiful! Now a lake known as ‘Lake of Fire’ it was the perfect backdrop for Sarah and James’ elopement. Adriana Morais was there to capture all the magic – the light, the mist and the amazing vibrant greenery; this really does look like a once in a lifetime experience. It’s making me want to go on an adventure! How about you?

Adriana the Photographer: It’s true, we really did an elopement inside a volcano! It’s a volcano that’s no longer active (the last eruption was in 1563) and it’s now a lake. Its name is “Lagoa do Fogo”. Lake of Fire in English. All of this magic happens in one of the most beautiful places in the world (you have to go there), the Azores. Nine beautiful and unique islands in the middle of the Atlantic, between Portugal and the United States. Sarah and James are the bride and groom that entered this adventure. There is nothing more special than getting ready together and helping each other to start this experience. Sarah is a very talented girl, so she did her own hair, make up and bouquet! They start on the top of the mountain and climb down for almost an hour to exchange vows inside the volcano, surrounded by the green and blue of the vegetation and the lake. The clouds were eating the vegetation and at the end of the vows small drops of water began to fall and Sarah and James were surrounded by clouds, as they became part of nature. We finished this special day with diner and it was the best way to end it, because Portuguese food is amazing! Because they wanted their families to be the first to know that they got married, they sent a beautiful letter to their parents.