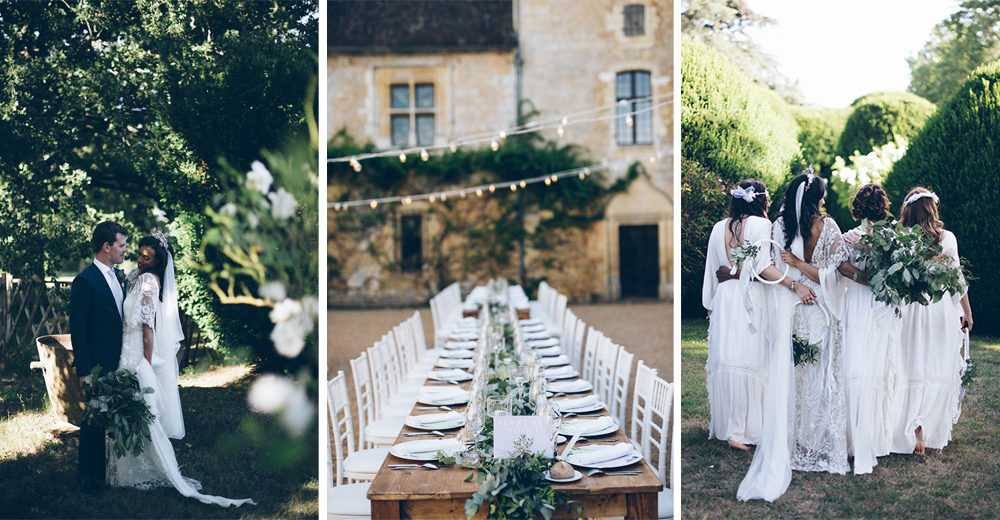 I’ve been looking forward to blogging this gorgeous wedding for a while – bride Tasha is a true creative and one seriously stylish lady, so I knew her wedding day was going to be heavenly. With a simple white and green colour palette, a stunning French chateau for a venue and Lelia Scarfiotti taking the photographs, there was only going to be one outcome really – utter effortless perfection.

If you’re swooning over the bridesmaids outfits, then you’ll want to keep an eye on Tasha’s bridalwear brand, Silken Studio – launching next year. But for now, let’s enjoy this French celebration and revel in the beauty of simplicity…

Tasha the Bride: I was inspired by the robed Goddesses you see depicted on old tarot cards and pre-Raphaelite paintings for my wedding day look, floating and simple. After trying on a few dresses at modern stores, nothing seemed to reflect the heritage I sought in my inspirations. A friend mentioned House of Vintage in London to me, and tried on many dresses there with the owner Marcia. I was about to leave the appointment without any luck, when Marcia pulled out something from her backroom that she’d just picked up on a vintage stock trip to LA. I knew it was my dress before I even tried it on.

Joseph is a big fan of Grenson shoes, and only wears them – so bought himself a brand new pair of smart brogues. His suit was by The Kooples.

After a viewing a few properties at home in the UK, we thought it would be more fun to make a long weekend out of it and get married in the South of France. We had spent many holidays in the Montpellier and Carcassonne region before, so began a bit of a venue search there. We finally settled on somewhere a little further inland at the Château de la Bourlie, in the medieval village of Urval. We loved how the venue was family-owned and held so much heritage, and also how the interior was a careful balance between old and modern. Polished concrete floors were mixed with beautiful and bold antiques like gold lamps, rugs and four poster beds.

We chose to have a foliage wedding with simple off-white details. Since we were in such a beautiful location, we didn’t feel the need to dress it too much plus those gentle greens are such a beautiful colour in themselves.

Lucy at the Chateau created my bouquet, which was made from Eucalyptus leaves, Olive Tree, Bay, Rosemary and other delicious foliage. The wedding party buttonholes has the smallest white rose in them. We had an Ancient Roman/ Greek inspired table runner made from foliage.

For the Bridesmaids (or Bridespeople as we preferred in the end!) I was inspired by the ‘Childlike Empress’ in NeverEnding Story film and also A Midsummer Night’s Dream (1935), which I had adored as a child. The latter film features fairies, and other magical creatures in silvers, whites and glittery fabrics. I was quite conscious as to how hot the weather was going to be, so I avoided synthetic fabrics that would make the girls too hot and instead chose a light cheesecloth summer kaftans. The girls wore crowns by Free People and my brand Silken Studio. We wanted the Groomsmen to look relaxed and comfortable, so they wore their own suits – which somehow managed to match the off-grey ties by Paul Smith.

We love The Moomins, so our guests sat down at the ceremony to songs from the 1960’s TV shows: Snufkins’s Song, Muumin Tani Fuyu Soshite by Tooi Akogare and To the Sleeping Country. I walked down the aisle to Johnny Harris’ version of Joseph’s favourite song ‘Wichita Lineman’ by Glen Campbell. Though the tree-lined aisle was longer than we anticipated, so the song ran out and we had to play it again! I think our little nephew who was ring bearer lost his way a bit on the way to the altar! We exited the aisle to my favourite band The Smiths ‘There is a Light that Never Goes Out’. During the ceremony, our friend Rose read us ‘A Moment Of Happiness’ by Mewlana Jalaluddin Rumi and ‘Love’s Philosophy’ by Percy Bysshe Shelley was read by our friend Matthew. Both our father’s have passed away, so Joseph walking his mother and mine down the aisle to their seats was a lovely moment.

After we got married, it was a nice touch to have local accordionist Sivan lead our guests past a walled garden into a tree-lined area for throwing confetti. Our first dance was to ‘Under this Moon’ by Nick Cave, and after that everyone was literally jumping and rolling around on the floor to Madonna, George Harrison and Pulp.

For the ‘Mise en bouche’ starter, guests had Gaspacho with mustard sorbet and crispy bread or Scallops with formage frais and asparagus. For the main ‘Plat’, we served Challlans duck with a pepper laquer, served with yellow carrot and lemon mousseline and a little parcel of mixed seasonal vegetables and Saddle of lamb with a herb rub served with smooth potato puree and aubergine stack. I’m a Vegan, so somehow ended up with all the best veg bits from these dishes as well as the most delicious tomato tart. We chose to have a ‘Piece Montée’ for dessert, a traditional French wedding cake which consists of a tower of profiteroles. My mum made wedding outfits for a Sylvanian Families rabbit version of Joe and I to sit on the top.

We were quite confident we wanted documentary style photography for the wedding. Lelia Scarfiotti was the first supplier I started talking to after we got engaged; I fell in love with her use of shadows and natural light, and more unique take on a wedding photo. We had been to visit her for an engagement shoot in Tuscany earlier in the Summer.